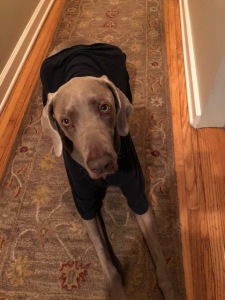 I still have my licking problem with my incisions so now I’ve graduated to a shirt.  It’s not my friend since it’s TOO hot. What is this with the parentals trying to dress me up like a cabbage-patch doll?  However, one thing happened that was quite exciting and worth reporting. It was becoming dusk outside and Mom and Dad were talking about something and I saw noticed an unusual movement that captured my eye in the thick brush in MY backyard. Before they knew it I nearly knocked Mom over and dove deep into the bush, and captured whatever it was and NOW it was in my mouth.

I was a bit unsure what it was and tried to show the parentals my achievement. All I got from Mom was “crate, crate” and Dad saying “No, NOT in the house.”  I panicked and got mixed parenting signals so I dropped my trophy and ran into the house into my crate. I heard them later saying it was a possum and apparently it was playing dead, which they do, and then escaped since it was magically gone the next time I went outside. I think that was enough excitement for the week for everyone.

Life in the Dopart-Batchelor household has been nonstop with trainings, and projects but we wish you all well in the first half of the year and hope you are staying cool and safe.  The weather has been a bit more temperate thank goodness since our 100 year old house has NO AC.  Please still bring ice-cubes if you come – just sneak them to me so I don’t get in trouble.