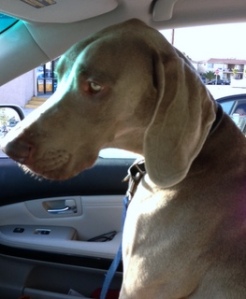 I was so glad it was Friday.  Dad was taking me to the “day’s” as he calls it and I was going to hang with my buddies Francine, Terry, Esmeralda and the manager Rollie all day at Centinela Feed and Pet Supplies on Pico Boulevard.

Dad had a photo shoot in Malibu and Mom was speaking to a group of doctors on gestational diabetes so I was glad to go to my second favorite place.

I have been going there almost a full year with a few of my other big dog friends – Xahri and Kaydon and we are all called the “grandfathered in club.”

Next thing I know Dad and I are cruising down Pico with no traffic, and I was hanging out the window with my face in the wind!  I know the way there, so as we got past the 405 I start whining and bouncing around since we could not get there fast enough!

FINALLY we got there and Dad and I go in and all of a sudden the manager tells Dad I can’t come there anymore.  WHAT!!  What is going on?  This must be a really bad dream but I think I’m awake?

Let’s just say I did not hear the rest of it because as the manager went on I got scared of his voice.  Dad knew I was not ok and took me in another room.  I tried to look through the glass but the conversation went out into the store.

Apparently they are changing their policy to no dogs over 35 pounds.  What!!  Since I’m almost 75 pounds I would have to go on a crash diet and I don’t think Mom would approve of that.  What went wrong?

I play with small dogs all the time.   I love all dogs.  Why are they discriminating against me?  I don’t understand.  I’m so sad.

Dad was beyond irritated since the management had been planning this for a few months.  And now there is no time for me to find my new digs.

Later in the day Dad had a conversation with the main district manager Molly.  She was not sympathetic to having my life and routine completely disrupted and said I could “visit” if I wanted to.  What?  I’m told I cannot see my friends again, I’m too big to be there, but I can visit (?)

Dad was upset since I was supposed to be able to go there forever since I was grandfathered in.  I was there from the beginning.  I think it put Dad over the edge but I was the one who was in the middle of a nightmare.  Remember I don’t like my routine disrupted.  I’ve been training the parental units since the beginning so this is a big cramp in my schedule.  It even says on their web site on in West Los Angeles they take dogs of all sizes so is that false advertising?

Yesterday we had three appointments to try to find a new place for me.  The parental units were on it.  All life stopped and it was Defcom in the house:  phone calls, computers, websites and a control center of activity.

The first appointment was by my old digs.  At first, I got excited and thought maybe there is hope but no cigar.  It seemed clean and people were nice enough.

I got checked for fleas and diseases and apparently passed the test.  Then they put me in a room by myself and then brought in a few dogs one at a time.  I was sort of okay till they put me in a big room I had not seen before and that’s when I freaked out and starting running all over and barking.  I wanted out!  This was not my place and I think I had a full-blown panic attack so Dad got me out and we left.

Next we went to these two houses in Venice.  That was a mess because I am just too big and it would not work for people who just take in small dogs.

What is going on with the hunt for a new place…it is really that difficult to find?  Maybe Dad was right when he told that lady Molly it was going to be difficult to find a spot where I could thrive and feel safe.

Dad always says our worst day is someone’s best day and that puts it into perspective so I guess I’ll have to trust it will all be okay.   We got up and went for a walk on the beach this morning.  I think it calmed us all.  We are a family and no matter what we will make it.

I guess this is what life is about…change, and opportunity for growth.  I just wish my big growth was not costing me so much.