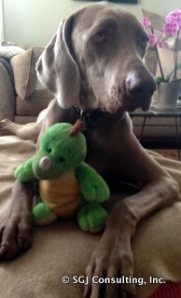 Some of my family lives in New Jersey so a little bit of my heart lives there too.  I was sad to hear about how the Jersey shore was hurt.  I was feeling bad about it so I dug through my toy box and found my stuffy from the NJ boardwalk.  I kept it close to me as I was thinking and saying some prayers for the people in NJ.

Otherwise I have been doing fairly OK except I did get into a little bit of trouble this past week.  I’m not really sure what the big deal was?

I snuck on the counter and got the big fancy fluffy role of paper towels (it is so deliciously soft) and took it into my crate and made a big mess.  Then I was feeling a little guilty and Dad was not giving me the attention I require so I went and “lifted” his glasses off the coffee table. 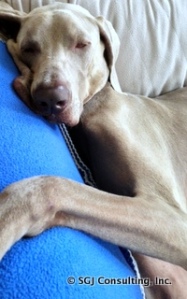 No I know this makes him go CRAZY so I casually walked up to him with them in my mouth.  I watched the veins pop out in his neck while he yelled “crate.”  I walked slowly down the hall with him in tow and went in my crate amongst the new fluffy VIVA paper towel bed.  I’m not sure why he was upset since I was confessing and he apparently did not receive my confession as well as could be expected.

No worries people since I have him wrapped around my paws.  You see later that afternoon I just snuggled up to him and we took a nap.

My heart and prayers go out to those affected by the fire on the New Jersey boardwalk.

2 thoughts on “Perry is SAD for New Jersey Shore”